The following is a photo I took of our snack of home made bread with molasses. My wife usually makes bread, once a month and I always look forward to a slice of fresh bread and molasses. 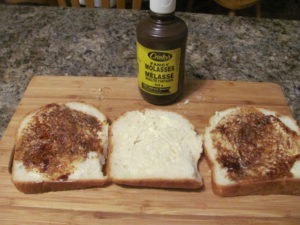 Here are a few comments from some friends who remember the crust man stories from their childhood.

Geraldine: “I was scared to death of the crust man.”

Amy:  “I used to have nightmares about that dude!”

Courtney: “It’s a wonder we went to sleep at night:”

I ate my crust and my favorite slice of bread is the heel, the heel tap or the crust.

I sat at the table and hungrily ate,
But the crust of my bread still remained on the plate.