Have you ever crawled through alders and brush searching for hub caps? When we were children, we would walk for miles on a saturday, scouring the sides of the dirt roads searching for them.  Beer and pop bottles were a bonus find.

I believe this is a 52 chev hubcap 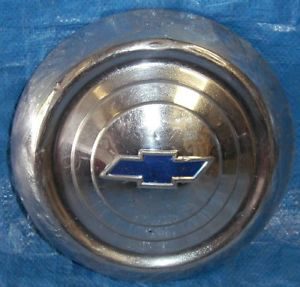 As mentioned above, the roads in our towns and communities were dirt, made from gravel or soil. The nearest paved road was over two hundred miles away. The roads were either dusty, full of pot holes or muddy. It would take quite the knock to loosen a hubcap but it did happen.

Most people knew the type of car or truck that a person owned so it wasn’t that difficult to find the owner. I don’t recall the dollar value of a found hub cap but it must have been only pennies.

My friends and I would would walk both sides of the road in search of those elusive caps. It’s surprising the distance that some of them would travel after breaking loose from the car or truck.  Some would be found deep in the woods or out on the marsh or barrens. I can only imagine the speed that some people drove on those roads. When a hub cap broke loose, at a high speed, it just keep rolling, either down the road or out into the woods.

There were three adult brothers who made some extra cash by selling hub caps. They had a sign put up, outside their house, ” hub caps for sale.” Those brothers were characters and were well known by most people in the area where we lived.

They were, lost and found, hub cap entrepreneurs. They would set up their find on the side off the main highway.  Their wares would be hanging from sticks, from tree branches or lying on the ground. It didn’t matter to them whether it was a chev, a ford, dodge or some other make of vehicle. If the cap fit they would try and sell it to the potential customer.

There have been many stories told about this trio. One was that as one of them was speaking to a potential customer, another of the brothers would sneak to the other side of the vehicle. He would pry off a hub cap and place it with their stockpile.  Then another of them would search through the pile and find the cap that the customer was looking for. It’s a believable story having known those brothers.

We have an older friend who combs the highways, around our suburban area. for recyclables. I don’t know if he makes any money doing this but every now and then he will pick up a wheel cover or for us older generation, a hubcap. We live in an area where the paved roads get filled with pot holes, in the spring, after the frost goes out of the ground. You hit one of those pot holes and you will either damage your front end, get a flat tire or lose a wheel cover.

I notice that one of the wheel covers on my van is broken..I wonder!