It’s been extremely windy here in Newfoundland and the forecast for the next few days, is gale force winds. I recall fishermen saying it’s blowing a gale.

Many Newfoundlanders and Labradorians are familiar with the devastating damages and loss of life caused by those extreme winds. Some of us have first hand experience and respect it’s power.

Those are a few pictures that I took today down at the end of Cherry Lane. The wind was gusting up to 100 kmh or higher.from the west. It was a mixed bag of weather as one minute the sun was shining and then we had rain and wet snow flurries.

That’s Kelly’s Is in the background. I would not want to be out there today. When I was sixteen, I spent a summer as a mate on a tuna boat. I recall one day we were steaming from Cape St Francis to Long Pond after a day sport tuna fishing. The wind was blowing down the bay. It was a rough ride coming up the bay. The bow of the boat would dig into the waves and throw water back over the bridge. You had to hold on so as not to be knocked around on the deck.

A number of years ago  a relative and I were turr hunting and as we went around the eastern end of kelly’s Island the wind changed direction. We were met with high winds and waves similar to what’s in the photo.  My relative was able to turn the boat and get back into the shelter of the island. We did make a decision to cross over to Long Pond.  It was a little nerve wrecking, however; my relative was good at reading the water and the waves. 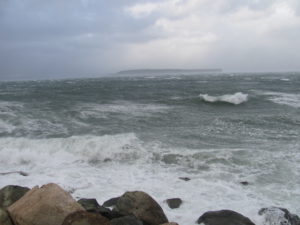 Looking down the shoreline towards Manuel’s Head. 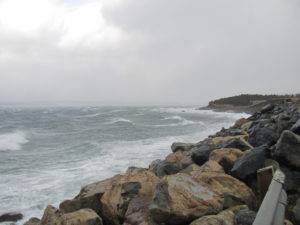